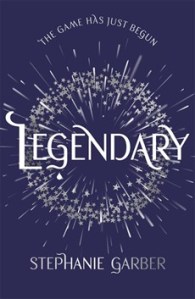 Synopsis:  After being swept up in the magical world of Caraval, Donatella Dragna has finally escaped her father and saved her sister Scarlett from a disastrous arranged marriage. The girls should be celebrating, but Tella isn’t yet free. She made a desperate bargain with a mysterious criminal, and what Tella owes him no one has ever been able to deliver: Caraval Master Legend’s true name.

The only chance of uncovering Legend’s identity is to win Caraval, so Tella throws herself into the legendary competition once more—and into the path of the murderous heir to the throne, a doomed l

ove story, and a web of secrets…including her sister’s. Caraval has always demanded bravery, cunning, and sacrifice. But now the game is asking for more. If Tella can’t fulfill her bargain and deliver Legend’s name, she’ll lose everything she cares about—maybe even her life. But if she wins, Legend and Caraval will be destroyed forever.

Welcome, welcome to Caraval…the games have only just begun.

I read an ARC received from Hodder & Stoughton via NetGalley.

“Every story has four parts – the beginning, the middle, the almost ending, and the true ending.”

After Caraval, I was slightly hesitant to read Legendary. Don’t get me wrong, I enjoyed it, very much so, but the protagonist in the first book was typical of the YA genre – i.e. she was annoying as hell.

Would the other sister be just as annoying? Would it get so bad that I would have to throw the book at the wall?

Regardless of my hesitations, I decided to give Legendary a chance.

To say I read this book quickly would be an understatement. I devoured it in one fell swoop; reading so late into the night I could hear birds chirping when I turned the last page.

Though our new protagonist, Tella, is still somewhat annoying, she is much less irksome than her older sister. She is plucky – sometimes foolhardy – and it makes the story SO much better.

“The air tasted like wonder. Like candied butterfly wings caught in sugared spiderwebs, and drunken peaches coated in luck.”

As with Caraval, Garber’s descriptions are pretty difficult not to enjoy. She builds a world more magical, if possible, than the first book. New myths and legends come to life with each turn of the page. This time, however, everything was a little more abstract. This time, your imagination has a chance to take hold and create something uniquie.

The end, again, leaves you on a beautifully created cliff hanger. And, once again, I am left bereft of any chance of diving straight into the next book.

Sometimes, there are some major downsides to ARC’s!

If you choose to read this, go in with no expectations. Though many characters are carried through from Caraval, and the story begins from the day after the first book, it has a different feel to it. A better one, in my opinion. Just let yourself get swept away with Tella’s adventure and see where the winds of Caraval take you.

You won’t regret it.