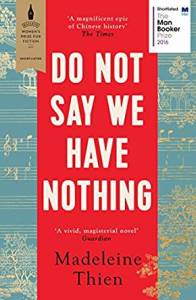 Synopsis: In Canada in 1991, ten-year-old Marie and her mother invite a guest into their home: a young woman who has fled China in the aftermath of the Tiananmen Square protests. Her name is Ai-Ming.

As her relationship with Marie deepens, Ai-Ming tells the story of her family in revolutionary China, from the crowded teahouses in the first days of Chairman Mao’s ascent to the Shanghai Conservatory in the 1960s and the events leading to the Beijing demonstrations of 1989.

It is a history of revolutionary idealism, music, and silence, in which three musicians, the shy and brilliant composer Sparrow, the violin prodigy Zhuli, and the enigmatic pianist Kai struggle during China’s relentless Cultural Revolution to remain loyal to one another and to the music they have devoted their lives to. Forced to re-imagine their artistic and private selves, their fates reverberate through the years, with deep and lasting consequences for Ai-Ming – and for Marie.

“What was misfortune but the quality of existing as something, or someone else, inside?”

It’s taken me a while to write this review. Whenever I start putting words to paper, a million feelings take over. I become a mess of emotions, weaving in and out between happiness, sadness, and despair depending on the particular passage I think about.

I bought Do Not Say We Have Nothing after attending the Bailey’s Prize for Women’s Fiction Shortlist event. An evening of awesome female writers with books ranging in genre from dystopian to literary fiction and back. I couldn’t help but walk away with this book in my hand.

What drew me most to DNSWHN was its musical theme. I am surrounded by music everyday (sort of inevitable when you work in music publishing!) and I couldn’t help but be intrigued by the story.

“The only life that matters is in your mind. The only truth is the one that lives invisibly, that waits even after you close the book. Silence, too, is a kind of music. Silence will last.”

I’ll admit I almost gave up at a few points early on, but I promise it wasn’t this book’s fault. I attempted reading Jung Chang’s untold history of Mao after I whizzed through Wild Swans and, basically, I became so irate that I had to leave it unfinished. I even gave the book away, just so I wouldn’t have to look at the cover!

Since then, any book about the Cultural Revolution in China has had the same effect. I can’t connect to the stories without turning into an angry, raging monster.

For Do Not Say We Have Nothing, however, I really wanted to persevere. I wanted to see what the Cultural Revolution was like for musicians.

And I’m glad I did. I was quickly lost in the history of the families. The “present day” chapters were whizzed through so I could get back to what I felt was the richer tale. Sparrow, Kai, Zhuli, Wen The Dreamer, and Big Knife Mother (who, by the way, I adored), all pulled my heartstrings in different directions and I got involved completely in their lives.

We won’t discuss what, as it’s a HUGE spoiler.

Also… I still can’t talk about it without choking up. But I can describe the event of me reading it.

I’m in bed, cocooned in my duvet. My housemate and I have called it a day. She’s fast asleep in the next room and I’m reading. I know something bad is coming. I can feel the dread rising, but I can’t stop turning the pages. I’ve been quietly hoping that it doesn’t occur but, then it happens.

I cry. We’re not talking shed-a-small-tear type crying, nor do I mean I was bawling my eyes out. The tears just escaped, I had no choice in the matter.

I keep reading and the tears continued falling. At about 2am, I had to put the book down, I hide it under my bed so I can’t see it – just to stop the tears.

I needed a few days after The Event to build up enough courage to keep going. In fact, reading on afterwards was heart breaking. Every other page came with a passage that stopped me short. The story was in pain and I was grieving with it. We suffered together till the end.

When I described the book to my family, they asked why I bother reading sad books. Why can’t I read happy books and be happy instead? My answer was simple: Life isn’t always happy. This might be a story but the equivalent happened in reality. And we can’t turn our backs on the sad stuff because it’s hard. We accept them, and learn to appreciate the good stuff even more because of them.

“It’s foolhardy to think that a story ends”

I didn’t expect this book to have such a huge effect on me. Don’t Say We Have Nothing isn’t necessarily a happy story – I mean, 90% of it is sorrowful and, at times, soul-destroying. But it’s also powerful in a quiet way. It’s hopeful and thoughtful and, above all, it shows us that life goes on.