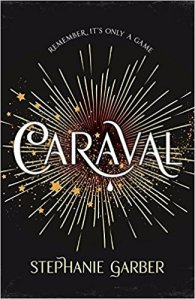 Synopsis: Scarlett Dragna has never left the tiny island where she and her sister, Tella, live with their powerful, and cruel, father. Now Scarlett’s father has arranged a marriage for her, and Scarlett thinks her dreams of seeing Caraval —the faraway, once-a-year performance where the audience participates in the show — are over.

But this year, Scarlett’s long-dreamt-of invitation finally arrives. With the help of a mysterious sailor, Tella whisks Scarlett away to the show. Only, as soon as they arrive, Tella is kidnapped by Caraval’s mastermind organizer, Legend. It turns out that this season’s Caraval revolves around Tella, and whoever finds her first is the winner.

Scarlett has been told that everything that happens during Caraval is only an elaborate performance. Nevertheless, she becomes enmeshed in a game of love, heartbreak, and magic. And whether Caraval is real or not, Scarlett must find Tella before the five nights of the game are over or a dangerous domino effect of consequences will be set off, and her beloved sister will disappear forever.

“Welcome, welcome to Caraval…beware of getting swept too far away.”

I’ve seen this book so much on #bookstagram, and rightly so. The cover is really quite beautiful and it would normally be exactly the book I’d want to pick up straight away…

…Except it really reminded me of The Night Circus, which I recall not being the biggest fan of.

And it was everywhere on #bookstagram; it got so hyped up I didn’t want to read it anymore.

But, one day, my Audible credits were full and I needed something to listen to on my walks from work. To get me back into audiobooks, I bought Caraval – I figured it would be an easy listen.

Boy was I wrong!

Instead of getting carried away in my walks, I ended up stopping regularly to make sure I didn’t miss a scene.

I may also have exclaimed loudly a few times (thankfully no one was around to think I was crazy).

I may also have sworn a few times.

Caraval is a brilliant book to listen to and, probably to read. I think I would have whizzed through this in a day had I had the book! Fast-paced and magical beyond compare, I couldn’t guess whodunit, or even who to trust.

Other than Julian. You can’t help but ❤ Julian.

“’No one is truly honest,’ Nigel answered. ‘Even if we don’t lie to others, we often lie to ourselves…’”

If I’m brutally honest, I would say I found Scarlet pretty annoying throughout, but I do about most YA female protagonists. I mostly wanted to shake her so she’d stop being a big pansy but you can’t have it all, I guess!

Overall, this was a great read and it ends on a MASSIVE cliff hanger. I’m now hugely excited for the next book to come out – I need to know what happens!

Though this time, I might have to buy the book. Though I loved listening to it, it was a lot slower than the pace I would read at.

“Hope is a powerful thing. Some say it’s a different breed of magic altogether. Elusive, difficult to hold on to. But not much is needed.”

One thought on “Review: Caraval, by Stephanie Garber”