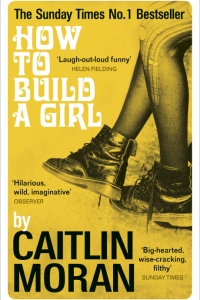 I don’t really want to die, of course! I just need to kill Johanna, and build a new girl. Dolly Wilde will be everything I want to be, and more! But as with all the best coming-of-age stories, it doesn’t exactly go to plan…

As with all the books on my shelves, it took quite a while to get round to reading this and, this time, I’m actually glad I waited so long. I automatically judge books that are ‘trending’ and tend to become overly cynical. So waiting over a year to read How to Build A Girl has probably given it a much better chance than if I had started it near publication.

Though, saying that, I’m pretty sure I would still have loved this book as much as I do now. Loved is, I would say, too small a word for how much I adored this. I laughed, cried and snorted on multiple occasions on public transport. I even looked around to share my (and Johanna’s) embarrassment with others because they just had to know what had happened. Safe to say people gave me a wide berth on the train whilst reading this!

And the reason why I loved To Build A Girl? Simple. Johanna. She is absolutely brilliant. The jumped-up, sex-crazed, outrageous version of myself at 14. Johanna is the literary nerd, spouting references to classics I still haven’t read and who uses terms such as “swashfuckler”. I was a maths nerd, working out how many minutes I’d spent on the house phone, adding VAT and willingly giving the money to my parents.

Her adventures as Dolly Wilde is, however, where our similarities end. Where I stayed struggling as a super-geek and have finally embraced my quirks; she recreates herself as a wild rock and roll journalist; drinking, smoking and sleeping her way through her late teens.

“what do you do when you build yourself—only to realize you built yourself with the wrong things? You rip it up and start again. That is the work of your teenage years—to build up and tear down and build up again, over and over, endlessly, like speeded-up film of cities during boom times and wars. To be fearless, and endless, in your reinventions—to keep twisting on nineteen, going bust, and dealing in again, and again. Invent, invent, invent.”

And it is hilarious, but heart breaking. Because we all see a little of ourselves in Dolly Wilde. ‘Fake it till you make it’ is the mantra we all live by. Cover yourself in whatever clothes, make up, heels, jewellery you think will protect you from the big bad world. Hide your insecurities, feign confidence, and maintain a constant balance of cynicism, sarcasm and indifference. Eventually, you’ll get there.

Turns out you never actually get there. Instead, you realise that none of it matters. With time, you accept that you have no idea what you want and that’s OK, you’ll figure it out. And that’s what happens to Dolly who, after a series of ridiculous events, accepts her Johanna-ness in the end.

“I am getting incredibly high on a single, astounding fact: that it’s always sunny above the clouds. Always. That every day on earth—every day I have ever had—was secretly sunny, after all.”

How to Build a Girl is a hilarious read but it is also littered with insightful passages about coming-of-age and accepting yourself for who you are. This is the first genuinely thought-provoking book I have read that makes you laugh your head off instead of crying.

A big 5 stars and an automatic trip to the bookshop to purchase her other books.