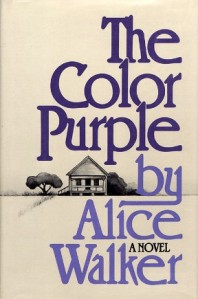 Synopsis: Celie is a poor black woman whose letters tell the story of 20 years of her life, beginning at age 14 when she is being abused and raped by her father and attempting to protect her sister from the same fate, and continuing over the course of her marriage to “Mister,” a brutal man who terrorizes her. Celie eventually learns that her abusive husband has been keeping her sister’s letters from her and the rage she feels, combined with an example of love and independence provided by her close friend Shug, pushes her finally toward an awakening of her creative and loving self.

I have numerous ‘to read’ lists dotted around and The Color Purple is one of the first books on my post-it ‘to read’ list at work. I hesitated for a long time before I read it, however; I have to be in a particular mood to read this genre, as I will either become furious or depressed at the injustice of it all.

The characterisation in the novel is astounding; even the secondary characters are multi-dimensional, not only in their good and bad sides, but in the events that have led them to act that way. I went through a phase of loving, admiring and despising each character at different points in the novel.

With the protagonist, Celie, I wanted to shake her, to scream at her to stand up for herself and fight back. Yet at the same time I admired her strength of character – after so much abuse (sexual, physical, and verbal) she holds on to love and hope without bitterness.

With Shug, Celie’s initial rival and later friend, I wanted her defeated from the get go (Team Celie all the way!). But with time, you can’t help but love her; it is her self-assurance and belief that helps Celie to find herself.

When discussing oppression, some authors tend to use overly-emotional narratives to shock readers. Walker, however, discusses the paternalism, sexism, and racism present without relying on these devices; the events are disturbing enough in themselves.

Furthermore, despite the strong focus on feminism, The Color Purple is not ‘anti-male’ in any way. Walker gives the men the opportunity to redeem themselves towards the end of the book and two of the primary characters finally accept the strong women in their lives. They begin to see a woman’s worth beyond sex and domestic slavery.

In fact, the fight for feminism is easily my favourite part of the novel. You witness each female character’s struggle, be it big or small, against the immoralities in their lives. Marie Agnes, struggling against the nickname that stops her being heard; Sofia, who refuses to stand down to anyone, especially the white man; Shug, who will do what she loves regardless of what society labels her; and Celie, who just wants to ‘be’. It is their interaction with each other, the acts of sisterhood that help each character on their journey to self-realisation. This strength of friendship is what, in my opinion, makes The Color Purple an outstanding piece of fiction.

“I’m pore, I’m black, I may be ugly and can’t cook, a voice say to everything listening. But I’m here.”

3 thoughts on “Review: The Color Purple – by Alice Walker”