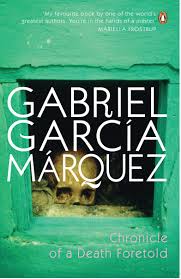 Synopsis: Santiago Nasar is brutally murdered in a small town by two brothers. All the townspeople knew it was going to happen – including the victim. But nobody did anything to prevent the killing. Twenty seven years later, a man arrives in town to try and piece together the truth from the contradictory testimonies of the townsfolk. To at last understand what happened to Santiago, and why. . .

After being practically forced to read No One Writes to the Colonel, I admitted to my colleague that I did actually really like the novella; so naturally, she shoved another Márquez novella in my hand and told me to read it. Like now!

So in a tiny act of rebellion I read it a month later. OK, fine, it wasn’t really an act of rebellion, it was just lower down on my TBR list than other books. I’m not really sure why, I think I just need to slowly accept that I like Márquez’s work (A Hundred Years of Solitude has left me seriously confused).

Before I get into the actual review, I would like to mention one thing about Penguin’s series of Márquez’s novels – they are beautiful! After visiting my colleague’s house and (obviously) scanning her bookshelf, I was extremely jealous at the how nice the collection looked together.

Ok, digression over, back to the review. I have to admit, I enjoyed this novella as much as the last. In my opinion it takes a master author to get you to actually think about a story rather than just enjoy it at face value; those that do focus on difficult subjects tend to get too bogged down in them. Márquez is one of the very few authors I have come across that has perfected the technique.

‘On the day they were going to kill him, Santiago Nasar got up at five-thirty in the morning to wait for the boat the bishop was coming on.’

You’re told the outcome of the story in the very first sentence; there shouldn’t be anything that shocks or surprises you – yet I found myself lost in a world of magical realism and couldn’t take my eyes away from the text. I just couldn’t believe that the entire town knew and intended to stop the murder, but nothing ever happened. By the end I was left wondering whether the brothers did really want to kill Santiago, or felt they had to because everyone had expected it of them.

Told in a journalistic voice, the narrative moves back and forth in time as it captures the reports of the citizens of the town. Despite the tone – and the fact you know the outcome from the start – the story never bores, wanders, or loses momentum. From the very first sentence, I was hooked.

In a quirky twist, Márquez’s fiction actually became reality – the novel tells the story of the narrator’s return to resolve a murder that took place 20 years ago. After Chronicle of A Death Foretold was released; journalists poured into the same town the murder the novella was based on in order to interview surviving characters.  Weird – but very, very cool.

I think it’s time I accepted that I really do like Márquez’s work – not quite sure whether I’m ready to tackle A Hundred Years of Solitude again though … maybe another novella? Maybe a certain, lovely, colleague will lend me another one from her collection. Or I might just break my book-buying ban and start my own…