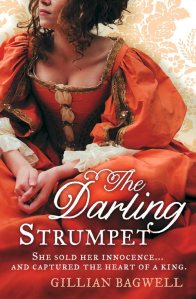 Synopsis: From her beginnings as a humble oyster seller, Nell Gwynn’s dazzling rise to fame has gone down in history. Step into the tumultuous world of Restoration England, and join Nell on her journey from courtesan, to famed actress to King’s mistress in a novel that is as captivating as Nelly herself.

She sold her innocence…and captured the heart of a king.

This is one of those books that have been sitting on my shelf for an age that I’ve constantly berated myself for not reading. Not only is the cover beautiful, but it falls under the category of historical fiction (one of my favourite genres, if you didn’t already guess). So it was one of the first choices to go into my super-cool, slightly-geeky, TBR jar. It was also one of the first books to be picked out.

The Darling Strumpet is set during the Restoration, when Charles II is restored to the throne. Nell Gwynn, second daughter to a drunken and violent widow, Eleanor, runs away from home to escape the drudgery of life as an oyster-collector. Her flight leads her to Madam Ross’s, where her 13-year-old sister, Rose, works as a prostitute . Nell, herself is enlisted at the tender age of 10.

We follow the story of Nell’s childhood and learn of her rise to fame as one of the first English actresses and the favourite mistress of King Charles II. Gillian Bagwell narrates the life story of this fascinating woman told, by her own admission, as truthfully and as close to the facts as possible.

I’d actually never heard of Nell Gwynn until reading this novel and have since fallen ever so slightly in love with her. Here is a woman who’s faced horrid circumstances from a young age (prostitution at 10?!?!?!) but manages to remain graceful, generous, and humble throughout her life. No matter how much she  rises in society, Nell never forgets her lowly beginnings.

Many historical fiction authors have a tendency to either over– or under-describe the historical context in which the novel is set. Gillian Bagwell is not one of those authors. Her depictions of 17th century London – the everyday lives of the shockingly poor, all the way to life at court – are described vividly; providing enough context that the novel feels real and engaging, but not so much that the reader is bogged down by minute details. I especially enjoyed reading about Nell’s time at the theatre – there are many fascinating descriptions of the theatres themselves, references to plays, actors and important events that occurred during the restoration.

The Darling Strumpet is a beautifully told story of an intriguing woman’s life from horrendous poverty to becoming the darling strumpet of England. It’s easy to read (I finished it in 2 sittings – it would have been one if work hadn’t inconveniently gotten in the way), and you can’t help but get attached to the characters. And by that I mean I got emotional at the end. OK, fine, I admit it, I cried. Happy now?!

2 thoughts on “The Darling Strumpet – by Gillian Bagwell”